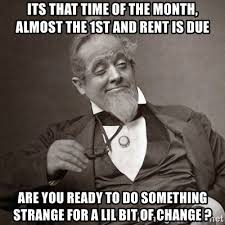 So, I had an interesting conversation with a few of my female co-workers the other day.

I have no idea what led to this topic, but we were discussing whether they’d let an old man suck on their toes for 3 minutes in exchange for $10,000 per month.  (hey, don’t judge us!  It was a slow day…)

Surprisingly, each of them said no!

No kissing, no nudity and no other contact after the 3 minutes are over?  Are you kidding me?

Look, if some perverted old lady made that same offer to me, I’d have my shoes off faster than you can blink!

For $10k per month, I’d lather my big toes in BBQ sauce if that’s what she was into.

For $10k per month, I’d dip my feet inside a tray full of mayonnaise and slide them up and down the side of her face if that what got her motor running.

I’d even get pedicures and have the prettiest feet in the world for that kind of money!

…or if she was into crusty Fred Flintstone feet, I’d work those bad boys until I had enough athletes foot to leave flakes around her mouth like a powdered donut!

Hey, whatever it takes.  Sorry mom, but a brotha’s gotta eat!  I’ve got bills man.

So yeah, long story short, if some freaky old rich lady is reading this right now, Cashapp me outside, how bout dah?  I’m down. 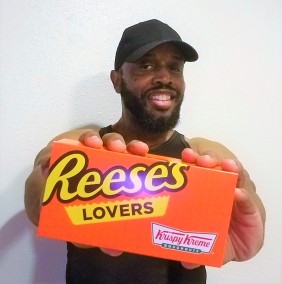 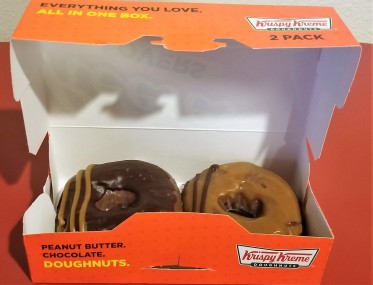 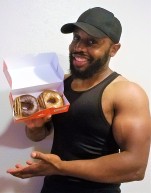 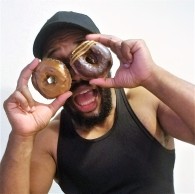 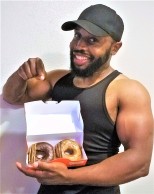 Both options are filled with Reese’s deliciousness, but one is more for the peanut butter lovers and the other is for those who prefer chocolate….like the Kardashians for example.

Well, there’s a 24-hour Krispy Kreme location right around the corner from my gym, so here I am, about to ruin my workout with the following taste test! #yolo 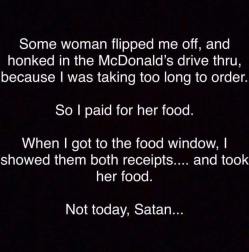 For what it’s worth, I at least walked inside instead of pulling up to the drive through window…

Anyway, let’s try these, shall we?

Since I prefer chocolate, I’ll save the best for last and start with the peanut butter.

Peanut Butter Lovers:  Oh wow, it’s literally filled with peanut butter but it’s still moist (sorry, lol I know people hate that word) and not overbearing.  You can also still taste the flaky donut glaze and chocolate swirled throughout so it really does taste like a peanut butter cup and a Krispy Kreme doughnut eloped or something.

And now for the main event… 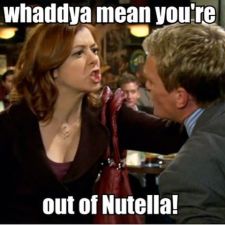 Chocolate Lovers:  This one is really good too, but it tastes more like a chocolate donut than a peanut butter cup.  Don’t get me wrong, it’s still delicious, but for the authentic Reese’s peanut butter cup flavor, the other one takes the cake….or um…donut…whatever, you get what I mean.

Anyway, each will set you back $1.79 and around 400 calories so don’t make these a habit, but they are delicious.

Do you have another food item, restaurant or recipe we should all try?  Tell us in the comments below!  Also join our Facebook foodie group, Phenomnomnomenal, by clicking here NOW!

As for today’s fitness tip, the best advice I can give you is to not do what I just did!  …or at least not consistently.

Obviously, my stop at Krispy Kreme was to provide a taste test for all the foodies out there, but if you want to hit your fitness goals, you can’t eat like that every day.  So yes, the occasional cheat meal is great, but if you “reward yourself with food” after every workout, you may never see the results you’re aiming for. 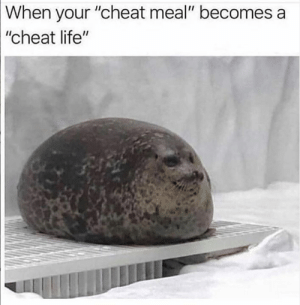 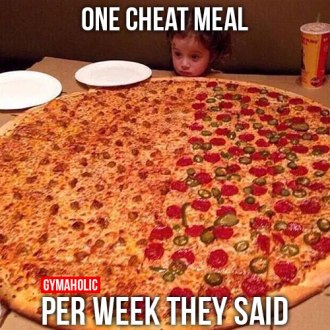 That also goes for “healthy foods” since many people mistakenly turn their protein shakes and smoothies into fattening desserts by adding ice cream, chocolate syrup and other crazy items.

Your post workout meal is arguably the most important meal of the day (yes, even more important than breakfast) so choose wisely!

So yeah, I promised that the next time you saw me hit my goofy flex pose, I’d be lower to the ground.  Although it’s hard to tell since the photographer was standing too close to capture the full shot, here’s the proof!  …sorta

The guys surrounding me in the photo are from the Canadian rock band Royal Tusk straight out of Edmonton, Alberta.

They’re all major wrestling fans and one member of the crew was even wearing a Degeneration-X tee (DX is the inspiration for my goofy pose in the first place) so if you’re a WWE fan, you’ll probably understand why we’re posing like that!

They were very cool to work and put on a great show so definitely check them out!

Royal Tusk was the opening act for Slash ft. Myles Kennedy & The Conspirators (yes, THAT Slash from Guns and Roses) who I also met that night but wasn’t able to get a photo with.

However, his production crew passed along with set of guitar picks and a ton of great memories.

In hindsight, perhaps I should have worn this outfit and snuck on stage.  I might have blended in… 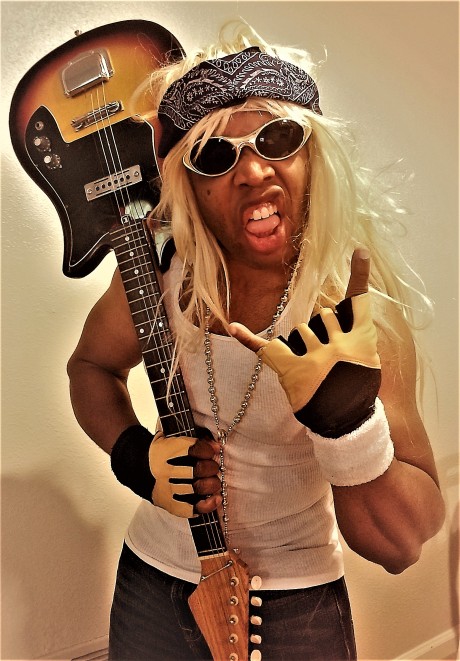 Here’s a photo where I definitely don’t blend in though! 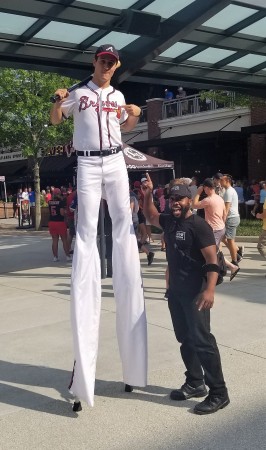 Even though I’m a diehard Yankees fan, I couldn’t pass the opportunity to pose with this guy outside of Suntrust Park, home of The Atlanta Braves.

I also had the honor of working The Atlanta United and Atlanta Falcons Military Appreciation Day events at Mercedes Benz Stadium.

Here’s a shot of the soccer field and another of a few members of our team posing with one of the amazing vehicles on-site that day! 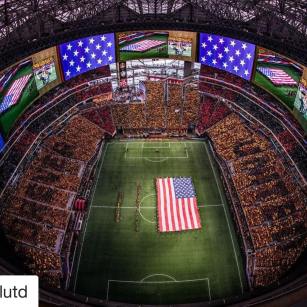 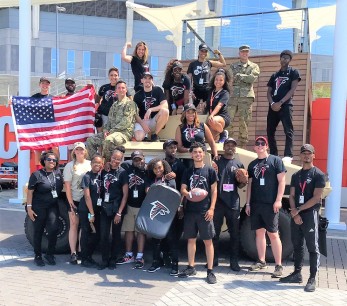 And here I am behind the wheel…skrrt skrrt! 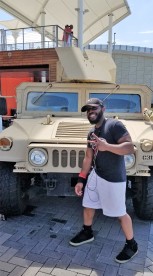 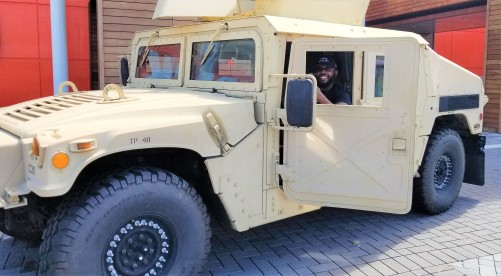 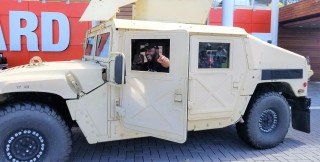 I could really do some damage at the drive through window in that bad boy!  I’ll have to see if they’ll let me borrow it next time I go to Chick Fil-a. 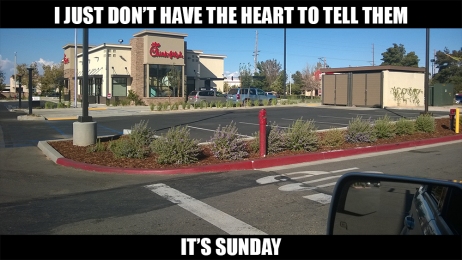 Anyway, before we go, here’s a shoutout that was sent over from Brad who’s an audio engineer for Joey Badass, Flatbush Zombies and Beast Coast!

We met during their performance at The Roxy in Atlanta.

My friends Shaa and Camille shot this footage at the after party on the tour bus.

Meanwhile, I was stuck inside breaking down the set so I couldn’t join them…but here’s a glimpse inside courtesy of Shaa Butta!

Apparently I missed one hell of a party… ha next time!

Anyway, thanks again Brad, it was great meeting you too.

And with that said, DJ – cue the music! 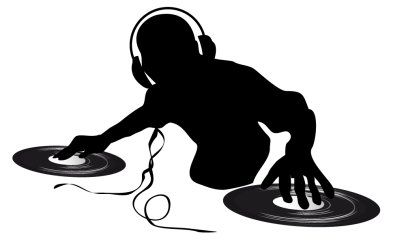 Before we go, let’s check out the “foodie holidays” for the next several days, shall we? 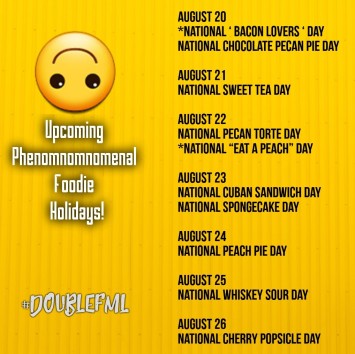 This is not a drill people!  I’ve been waiting for this one all year! 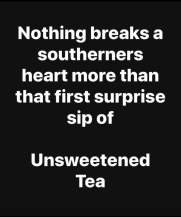 National Sweet Tea Day works for me too but I can’t imagine people clamoring for a National Unsweetened Tea Day.

I’m sorry if you’re a fan, but unsweetened tea just tastes like sadness.  It’s like drinking a cup full of caffeinated tears.

If you’re a fan though, feel free to fight me in the comments!

Even if you’re not a fan, comment below anyway!

Or if you love The Fat Darrell Sandwich and want to profess your love in a video like Brad, feel free to slide into our DM’s on social media by following us using the logos on the main menu.  We just might repost it!

Okay folks, well, that about does it for today.  Whatever you have planned for this week, I hope it’s amazing!

In the meantime, let’s continue the discussion below and on social media!

“Bigamy is having one spouse too many. Monogamy is the same…” 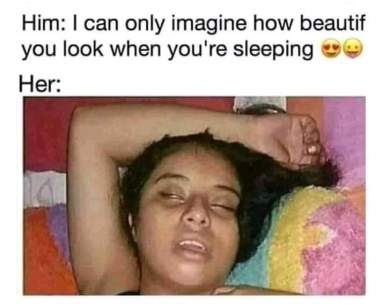 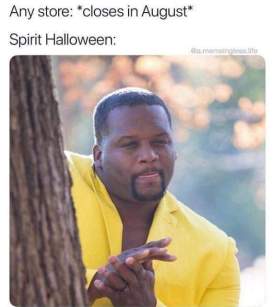 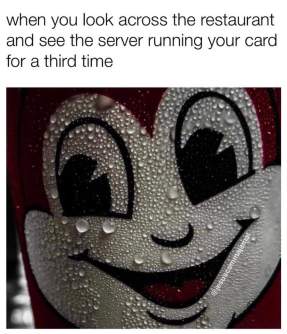 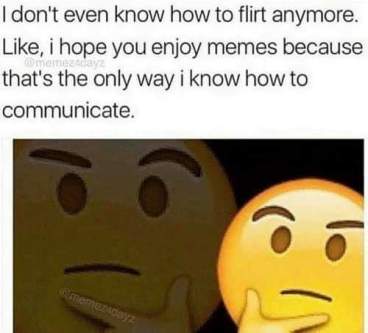 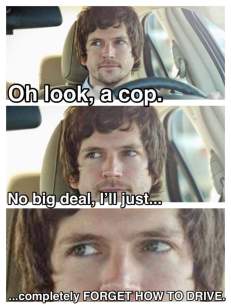 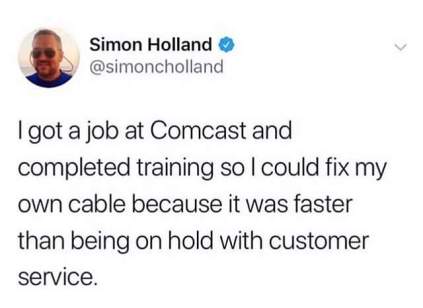 8 thoughts on “Something Strange for Some Change” 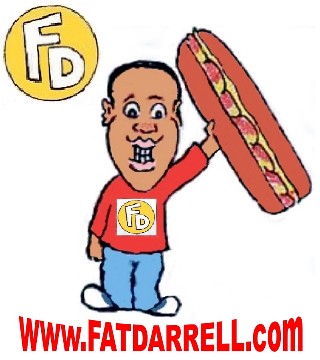