Is everyone okay?  Facebook and Instagram went down for nearly 10 hours the other day and people were suddenly forced to spend time with their families and actually be productive at work.  The horror!

Thankfully both websites are back up and running but my thoughts and prayers go out to all who were traumatized by this tragic event and are still recovering.  #survivor 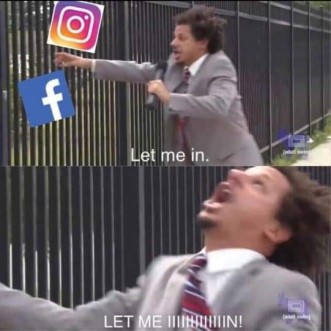 Thoughts and prayers also go out to my buddy Stan Erie.  He’s the biggest Chick-Fil-a fan I know so last post when I ranked them at the bottom of my list, his head nearly exploded! 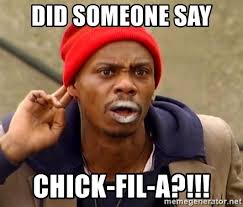 Sorry man, but those were special circumstances.  Normally I’d have them ranked at number 3 (behind pizza and burritos) but that’s still not high enough for most people here in The South.

Chick-Fil-a is its own cult religion down here, which is why my next statement may be perceived as blasphemous but dammit, I’m going to finally say it.

Are you okay Stan?  My bad but before the Georgia State Police show up to arrest me for my transgressions, allow me to explain myself.

Yes, it’s tasty so let’s get that out of the way first and foremost.  I do enjoy their food, but I don’t crave it.  At least not like I used to back in New Jersey when I couldn’t have it as easily.

Like I said last post, perhaps absence makes the heart grow fonder.  Here in Atlanta where they’re headquartered, they have partnerships with both The Atlanta Hawks and Mercedes Benz Stadium (2 of my current employers), so I have it all the time.  Maybe that’s why it doesn’t feel special anymore.  The thrill is in the chase I suppose.

Again, their customer service is great, the commercials are hilarious, and their dipping sauces are amazing but at the end of the day, it’s just a basic chicken sandwich.

Off the top of my head, Zaxby’s, Wendy’s Spicy Chicken, Popeyes, Cluck U and this local spot Chicken Kitchen back in Tinton Falls, NJ are just a few of the options I’d crave first.

Granted, I have yet to explore the entire Chick-Fil-a menu, so perhaps I should do so with one of the local superfans to see what I’m missing.

Again, I do enjoy their food and have absolutely nothing bad to say about them, but so far, my experience just hasn’t lived up to the massive hype. 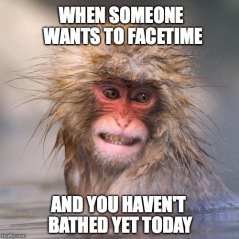 While I’m voicing unpopular opinions, video calls are also overrated.  I remember daydreaming about this technology becoming a reality back in the day but now that it’s here, I rarely use it.

I’ve come to realize that I don’t actually want to stare at most people while we’re on the phone.

First of all, I’d rather someone just text me but if you insist on a phone conversation, I shouldn’t have to turn on lights or look presentable just to speak to you. 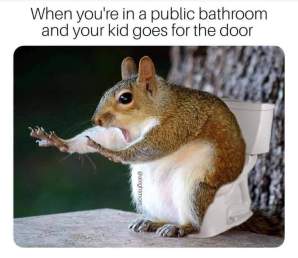 Do you know how many times I’ve taken phone calls on the toilet?  Do you know how scary it is when that video call preview pops up when you’re midway through a 2-flusher?  I almost fell off the seat last time!

That is NOT how I ever want to be found.  Concussed and pantsless on my bathroom floor streaming live on Facetime as the EMT’s stretcher me out?  Um, thanks but no thanks.

I also can’t multitask as well during video calls.  Undivided attention is a rare luxury these days.  How can I clean my apartment or scroll through memes on Facebook when I’m expected to make eye contact the entire time?

Even when I do, I’m usually distracted inspecting my own face to make sure that I don’t look like an idiot on camera.

I suppose video calls come in handy for long distance relationships or as proof that someone isn’t a catfish, but generally speaking, I’ll pass.

Perhaps I have intimacy issues and occasional antisocial tendencies?  Call it what you want…or better yet, don’t call.  Text.

Ahh, there I said it.  That felt great to finally get off my chest, ya know?

What can I say?  My brain isn’t wired like most (see the post about my Myers Briggs Personality Test by clicking here).

But hey, whatever, fight me.

What unpopular opinions do you have?  Comment below…if you dare!

OMG I just saw the cutest little baby in the lobby!  She was smiling and waving at me.  She almost made me want to have one of my own!  Wait, nope…she’s crying now.  Nope.

If you’re reading this, sorry to get your hopes up Mom!  Maybe someday but mini humans are a lot of work!  I can barely keep these houseplants alive.  I might need a Ouija board to bring back the Ficus in my kitchen.

If you read my St. Patrick’s Day post from 2017, you’ll know that I missed out on my chance to try corned beef for the very first time.

Well, I finally had it this year since it was one of the featured menu items during our Atlanta United pre-match meal at Mercedes Benz Stadium.

Hmm, it wasn’t bad.  It was kind of just there.  It tasted like air.  Air flavored meat.

It looked like it would be full of flavor but nope.  What condiments go with corned beef?  Perhaps I should have “ghetto-fied” it and added hot sauce?  Would Chick-Fil-a sauce work on that?

The ingredients were fresh and well prepared though. I was surprised it was reddish pink though.  I always thought corned beef was brown and shaped like a hash-brown.

Wasn’t there a canned version back in the day?  I’m having repressed memory flashbacks of some relative skeeving me out trying to get me to try it as a child.

Anyway, the version I had was bland but okay I suppose.  It’s not something I’d ever seek out again on purpose, but it wasn’t horrible either.  It was like eating an episode of The Bachelor…

Speaking of Atlanta United, here are a few photos from the games I’ve worked since the new season started last week.  It feels like the season just ended!  Geez…

One of my supervisors, Simone, hates that I always wear tight shirts.  She has a point though, my tees are a bit “Baby-Gappish” at times!

She jokingly guessed my shirt size as a 5T, but she’d better stop messing with me or I may try this on next time…

Anyway, here are a few photos from various events with The Atlanta Hawks as well, including another cameo during Fox Sports South broadcast coverage. 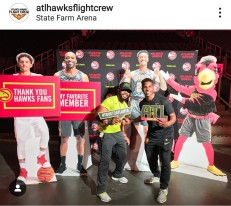 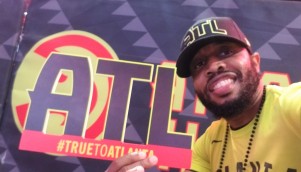 And who would have thought I’d end up doing “The Macarena” on live TV in 2019 but here I am in the front left.  Fortunately I remembered the dance steps before the camera turned on!

Today’s fitness tip is inspired by the title “Fight Me” since fighter style workouts are all the rage lately…and with good reason.  They’re fun, effective and provide great results!

Fighters are some of the most well-conditioned athletes in the world, so training like one can lead to great results, even if you never have plans to actually step into a ring or cage. 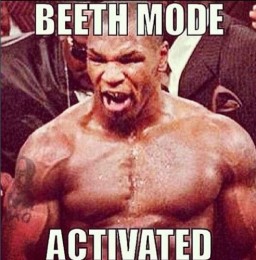 From kickboxing to Ju-Jitsu, these workouts combine strength, endurance and flexibility to provide an intense sweat!

If throwing punches and kicks sounds too intimidating, you can still incorporate the conditioning and strength training components by breaking your normal workout into 3-minute bursts of non-stop movement followed by 1 minute of rest to mimic actual boxing rounds.  You’d be surprised how exhausting that is!

There’s a reason why Rocky is one of the most revered and inspiring fitness movies of all time!  Try spicing up your next workout with some boxing moves of your own and make those fat cells cry like Apollo Creed.  “Yo Adrian!!” 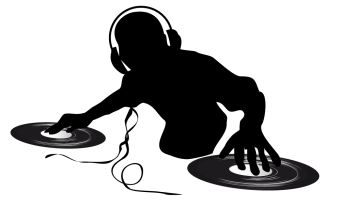 Shamrocks And Shenanigans – House of Pain

We Be Clubbin (Eye Of The Tiger Remix) – Ice Cube ft. DMX

Till I Collapse – Eminem

You’re the Best Around – Joe Esposito

Do you have another song that fits today’s themes or that’s just so good we should check it out anyway?  Tell us in the comments below!

Okay, I’d better wrap this one up since my accountant (aka Mom) has been yelling at me for days to finally send her my paperwork.

I’m also planning to finally clean my apartment since it looks like a tornado blew through this dump recently,

I’ve just been so busy that I haven’t had time to do a thorough deep cleaning for awhile now, but it’s time.

Speaking of “Spring cleaning” check these out!

I actually forgot that I had these since I hid them from myself in the top shelf over my refrigerator.  Since I’m short, that cabinet requires a chair to reach so it’s rarely opened!

Oh yeah, if you’re distracted by the shirt in the background, here it is in plain site.

I’ve posted it before, but it has new meaning now since DJ’s auntie may be going away for a little while…

I have no intention of ever drinking from these glasses though since they’re already collector’s items.

That’s part of the dilemma when deciding to get rid of things.  I posted this on The Fat Darrell Facebook page the other day:

If you count my old J.lo wall calendars in storage, I technically have all 5 but I’m guessing they’re referring to 2019, so I have 4…although I can probably throw out these menus now.

Speaking of menus, let’s check out the “Foodie Holidays” for the next several days, shall we? 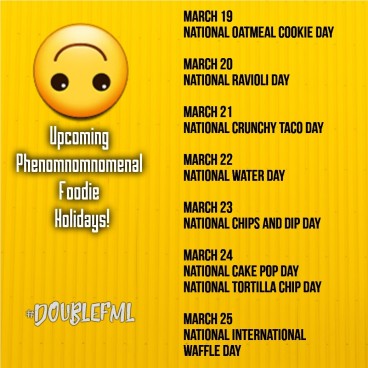 Tacos, ravioli and waffles?  Okay, yeah, I’m ready!  All of these are great.

Well, “Water Day” is admittedly kind of boring but my skin has been pretty awful lately so I should definitely start drinking more before I end up looking like my houseplants…

Oh, and there’s this old school website called BlackPlanet.com that many users have suddenly flocked to because of a misguided rumor that Solange Knowles purchased the website.

She didn’t, but if you’re on there, you can find me @majesticgroove.  The site is pretty janky and ratchet though so proceed with caution!

Okay folks, that about does it for today.  Whatever you have planned for the week, I hope it’s amazing! 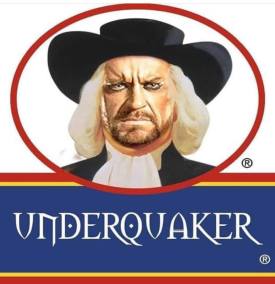 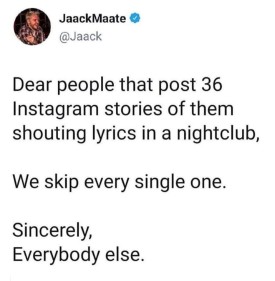 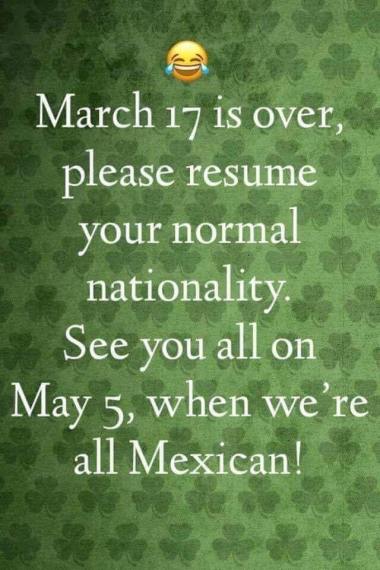