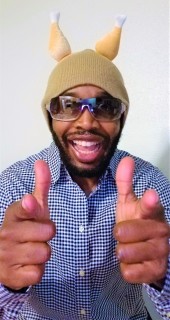 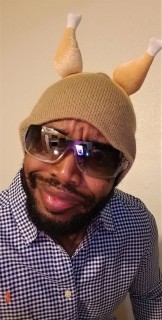 I saw a comment online that said Thanksgiving must not that great of a holiday since nobody wrote a song about it yet, but haven’t we?

For those who are lost, the following 1-minute video may change your life.  Enjoy!

I suppose Adam Sandler’s “The Turkey Song” from SNL was technically first back in the day, but this one is current and catchier.

I’ll also play this song on an endless loop all the way to my parent’s house for Christmas next month too!

Oh yeah, and that’s not the only music video featured in this post so stay tuned!

So, what’s a “Turhawcon” you ask?  It sounds like a city back in Jersey but no, that’s what I’m naming the combination of a turkey a hawk and a falcon since we’ll be discussing all 3 of these birds today!

I almost included a fourth bird since I came dangerously close to trying KFC’s new chicken and waffles, but aside from running out of time, the reviews for this product have been pretty awful so far!

I may still try it out of curiosity, but in a week filled with home cooked meals and gluttonous buffets, do we really need a fast food taste test this post?  I think not.

What are you all doing for Thanksgiving anyway?

I’m scheduled to work on Wednesday and Friday so that won’t leave enough time to visit my parents in South Carolina or my brother in Virginia.

We’ll see what I end up doing this year.  Between the parade and 3 football games though, even if I end up alone with a turkey sandwich, that still sounds like a great day to me!

Oh yeah, speaking of turkey, one of my co-workers warned me about a massive and deadly turkey salmonella outbreak.  I just Googled it and she’s right, the USDA has recalled a ton of raw turkey products.

I won’t repost the entire article here, but I encourage you to do your research and use proper cooking techniques to lower your potential risk.

Wow, scary stuff!  Sad news just a few days before Thanksgiving…well, unless of course you’re a turkey.  Then I’d imagine this is an incredible turn of events!

I’m sure ham sales are through the roof now.

If you go with an alternative Thanksgiving main course this year, share what you came up with in the comments below!  Thanksgiving tacos for everyone?! 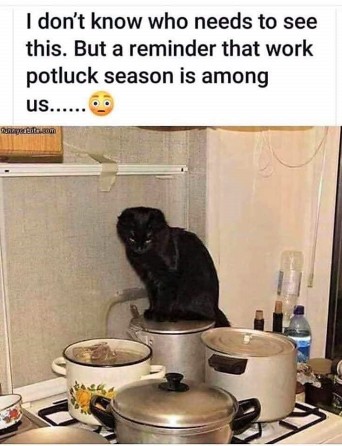 #facts to both of those!

I may have already told this story, but that pot luck meme reminded me of an office party we held at the gym I worked for a few years ago.

We had a pot luck lunch that I was so excited for since everything smelled incredible!

I ran to the bathroom to wash my hands before it was time to eat and when I walked in, it smelled like someone died in there!  The sounds coming out of stall 2 were louder than a fireworks display on the Fourth of July!

As I was rinsing my hands, the toilet finally flushed, and the stall door opened.  Out walked the guy who made most of the featured dishes!  He stopped at the sink only to look in the mirror as he ran his fingers through his hair a few times.  He then covered his nose with his palm to sneeze before grabbing the filthy door handle with his bare hands to walk out!  Umm….really?

Needless to say, I didn’t touch any of his food that day!  I also never shook his hand again!  It was fist bumps from that moment forward!

I don’t trust everyone’s cooking anyway, but once I saw him exit that stall with the cheap 1-ply toilet paper without washing his filthy digits, that was a wrap for me!  I ended up buying my lunch from the cafeteria instead.  Everyone else seemed to enjoy it though so I didn’t bother telling them that his secret mystery ingredients were farticles and airborne pathogens.  Mmm…Bon Appetit.

I suppose one good thing about working Friday is that I won’t be as tempted to join the Black Friday madness.  I haven’t gone in years, but I used to love the adrenaline rush!  I once ran a full sprint across Target to buy a digital camera for my mom!

Ever since Cyber Monday became a bigger deal though, my days of camping outside of Best Buy are most likely over.

I’d consider going with someone just for the spectacle but Amazon.com is literally my favorite store.  Great prices, huge inventory and I don’t have to fear being trampled for a half price blender.  What more could you ask for?

So, in the “Buffering…Level Up” post, I announced that I’m now also working for Mercedes Benz Stadium as a live events associate here in Atlanta.  Well, I finally worked my first event on Sunday as The Atlanta Falcons took on the Dallas Cowboys!

Although the game started at 1pm, my day started at 5:30am!  Forcing myself to go to bed before 10pm on Saturday night was difficult to say the least!

Once I was there, I received my ID and field pass, a Falcons t-shirt and this official looking walking talkie.

I was also provided with a Mercedes Benz stadium hat and polo.

I don’t have a ton of photos since I was busy most of the time.  It was also my first event so I didn’t want to have my phone out much, but here are a few pictures that I managed to take! 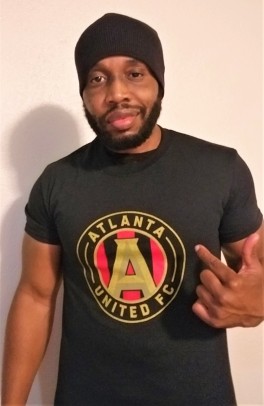 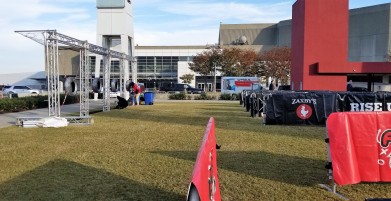 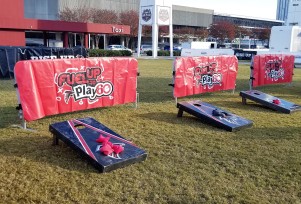 One picture that I’ll definitely have to capture next time is our employee locker room!  When they said lockers would be provided, I was thinking they’d set us up with dingy metal lockers like the ones in my old high school gym.  I was way off with that assumption though because our lockers were the exact same ones the players use!  Each one even had a Falcon’s branded logo chair and a name plate for each employee!

They also provided us with a fully catered lunch buffet, so you know I loved that too!

Although the home team lost, it was still a great day!

Hmm, that loss may have been my fault though since I may have brought my sports team bad luck with me!

As some of you may know, I’m also a long-suffering Rutgers University and San Francisco 49ers fan.  My Lakers and Yankees haven’t done so well recently either.  It’s like every team I root for is cursed!

Well, now that I’ve added The Falcons and The Hawks to the list of teams I support, they too might be doomed!

Speaking of The Hawks, as many of you know, I’m a member of The Flight Crew Experience Team who energizes the crowd at games and events.

Well I’ve taken things a step further by writing and recording an original hype song for the team that I’m about to share with you in a moment!

See?  I told you there was a second music video coming.  Okay, well it’s lyric video to be exact, so you’ll be able to follow along.  An official video may be coming soon though!  It’s early in the process (I just recorded this last week) but team officials who’ve heard it so far have been impressed so we’ll see what happens.

Even if you’re not a Hawks or a basketball fan, I’m sure you’ll still love the song.  It’s pretty catchy if I do say so myself.

Anyway, without further ado, I present the world premiere of my new song “READY.”

Feel free to let me know what you think in the comments below or on YouTube!  Oh, and bonus points for anyone who remembers which post that pizza hoodie first appeared in!

We’ve reached that time of year where many fitness goals come to a screeching halt, but it doesn’t have to be that way.  I definitely encourage you to enjoy Thanksgiving with your family, but make sure to get back on the wagon the next day! 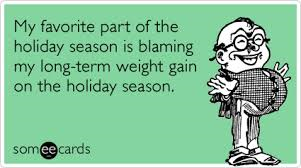 If you’re hosting, send all the fatty sides and desserts home with your guests so you’re not tempted by them anymore.  Salmonella scare aside, turkey is extremely healthy so keep plenty of that and healthier sides for your leftovers but the cakes and pies have to go!  Out of sight, out of mind, right?

Keep a photo of your dream body or outfit handy so you can focus on that instead!

If you’re near Alexandria, VA you can also save a ton of calories by inviting my brother over.  He’s somehow managed to get both drumsticks and the first slice of pie at every Thanksgiving dinner we’ve ever had together!  I’ll see if he’s available to travel…

U Name it (Remix) – Shirley Caesar

Oops! …I did it again – Britney Spears

Before we go, let’s check out the next batch of “foodie holidays” that occur between this and next post!

Hmm, I suppose the cranberry relish kind of makes sense for Thanksgiving but where is turkey and stuffing?  I’m so confused.

The espresso can also help you fight angry mobs at Walmart on Black Friday I suppose so that one makes more sense.

National Sardines Day though?  I hope I don’t run into any close talkers that day!

As for the rest of my week, I’ll be working The Atlanta Hawks games on Wednesday and Friday.  Sunday I’ll be working at Mercedes Benz Arena as Atlanta United faces The New York Red Bulls in the Major League Soccer semi-finals so that atmosphere should be crazy!  I was a guest of The Red Bulls for a game several years ago so it’ll be bittersweet rooting against them but Go United!

I hope you all have an incredible time with family and friends this week!  Make sure to post photos of those delicious plates on our Facebook foodie group, Phenomnomnomenal!  Click here to join now!

You can also follow me on social media by clicking the logos on the side panel. 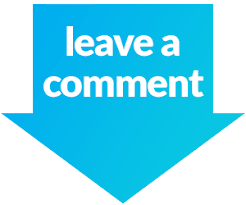 Before you go, Thanks for Giving me a comment below!😉

Okay folks, that’s a wrap!  Thanks again for dropping by and to my fellow foodies, this is what we’ve been waiting for all year so enjoy those loaded mashed potatoes! 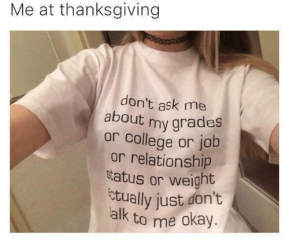